Certain LSCache features rely on rewrite rules in .htaccess files on the web server to define cache behavior. To accurately and consistently cache at the ADC level, you will need to manually copy the server .htaccess rewrite rules to the ADC. This is true for LSCache with or without a plugin.

We strongly recommended leaving caching to the backend servers, but if you do decide to enable LSCache at the ADC level, this guide will explain how.

There are four steps to setting up LSCache for Web ADC:

All of these steps can be executed from within the ADC WebAdmin Console.

On the backend web server, you will need to install a LiteSpeed Cache plugin. If there is no cache plugin available for your application yet, you can use rewrite rules to control LSCache.

In this example, we will use a virtual host named Example_vHost, but you should replace that with the name of your own preferred virtual host.

Enable Cache for the Virtual Host¶ 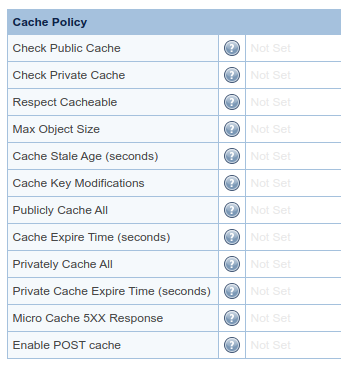 If you're using a LiteSpeed Cache plugin, install and activate it.

Only copy the cache-related rewrite rules. Other .htaccess directives may not be supported by Web ADC in that format.

If you are using the LiteMage plugin for Magento, please set Enable LiteMage to yes in the virtual-host-level cache root setttings. 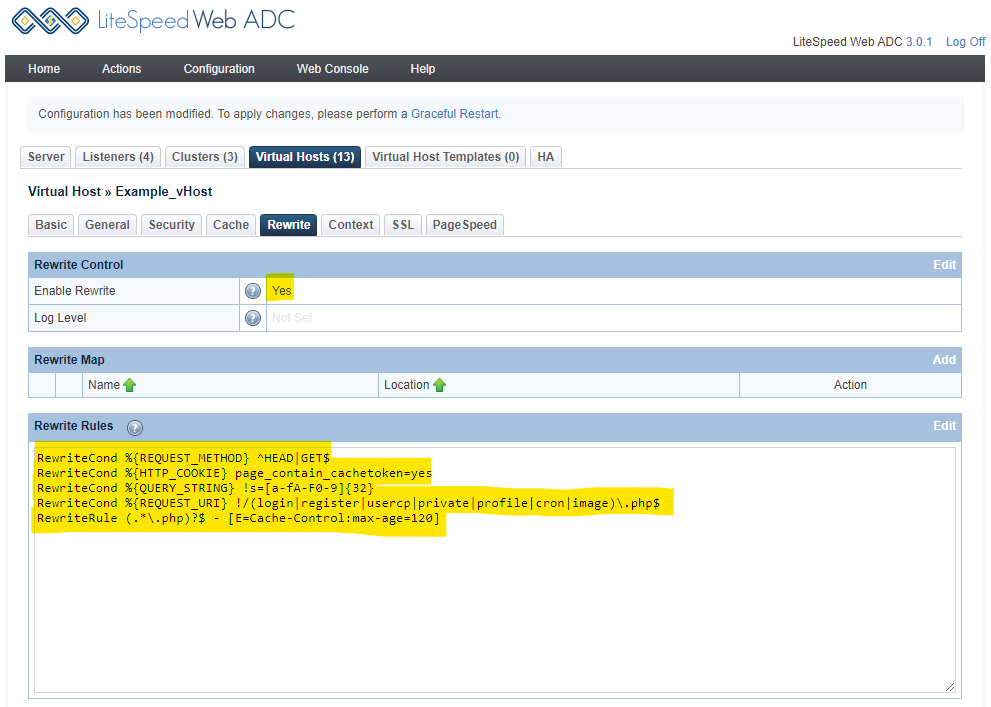 If you are not using a LiteSpeed Cache plugin, please follow the instructions for setting up LSCache with rewrite rules, and put the rules directly into the ADC Virtual Host as described above.

LiteSpeed's LSCache engine was designed to cache dynamic pages. Static files can be served directly from the web server with the best performance, so under normal circumstances, serving static files from cache would be a waste of resources and unnecessary steps.

Here's how to enable cache for static files on your ADC:

The mod_expires directive generates browser cache headers, such as Cache-Control: max-age=533280, Expires: Sun, 03 May 2015 23:02:37 GMT, etc. These headers are used by the frontend browser to cache static content requested from the server. Similarly, LiteSpeed ADC may be configured to honor these same browser cache headers, thereby storing static files directly in the ADC's cache file location, once they are retrieved from a backend server. 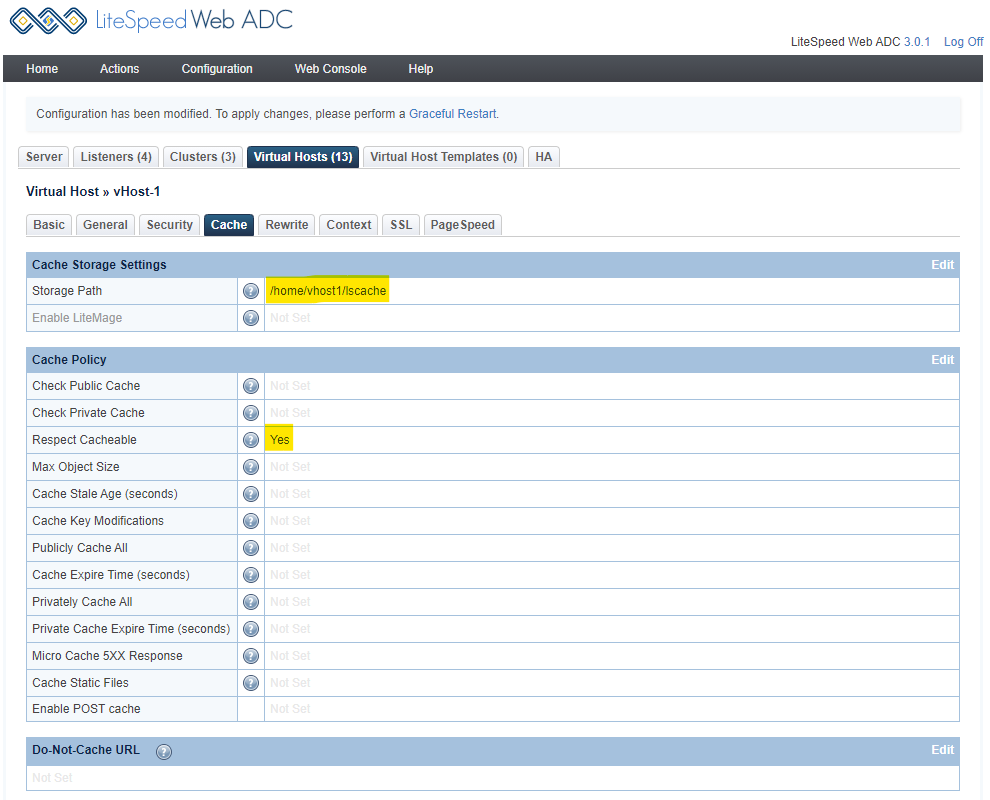 Assuming you want to set up static caching on the vHost-1 virtual host, navigate to Configuration > Virtual Hosts > vHost-1 > Cache. Verify that the Storage Path has been set. The key to static file caching is the Respect Cacheable setting, which should be set to Yes or Not Set.

Respect Cacheable is enabled by default. So, assuming it is not explicitly disabled at the server level, it may be left Not Set at the virtual host level.

Let's say we have a CSS file which has Cache-Control: max-age=96592000, public and Expires: Fri, 20 Sep 2019 18:04:53 GMT headers. These headers are set from the backend web server, either through a LiteSpeed Cache plugin or a mod_expires directive in .htaccess. 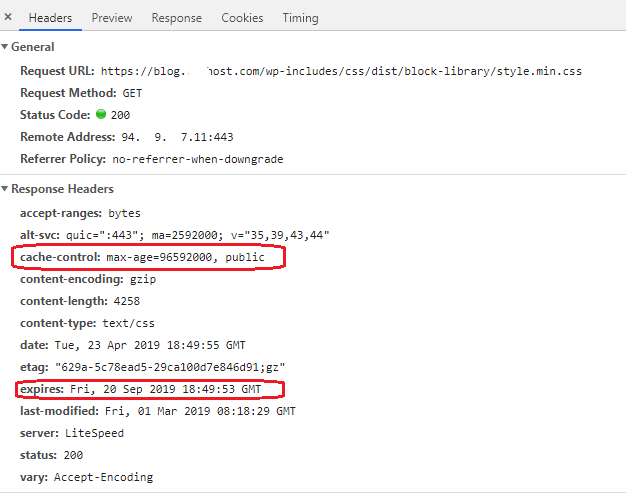 ADC will honor such browser cache headers, will store the static files in the cache folder, and serve the files from the ADC cache directly for future requests. When that happens, you will see the X-LSADC-cache: hit header. 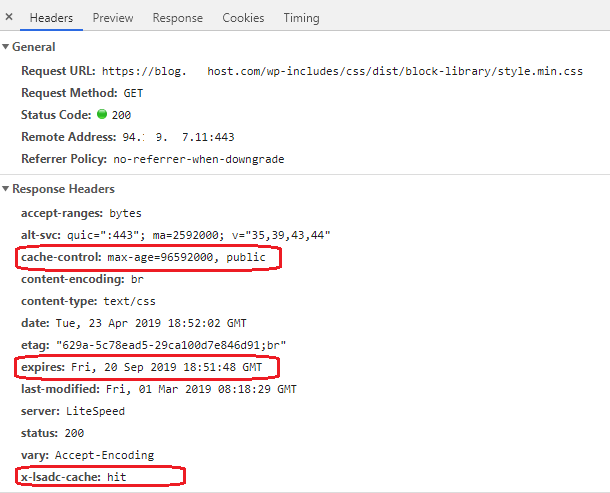 For more fine-grained control in ADC v3.1.7 and above, you can take advantage of LiteSpeed Cache's tagging system to purge static files by type on demand.

The following cache tags are available for your example.com domain:

These tags are automatically assigned when the static content is cached, and you may use them for purging. Just like dynamic cache, static cache may be purged with the X-LiteSpeed-Purge header or through the cache-purge environment variable in rewrite rules.

To purge all of mydomain.org's cached images using a response header:

For more ways to use and configure LSCache, please see our LSCache documentation in full.