Development on the 3rd party LSCache Purge plugin for Craft CMS has been discontinued:

Per-URL cache busting is now broken in Craft 3.5 because of changes to how template caching works. You will need to nuke the whole cache on save if you are running 3.5+

This plugin is EOL. Minor patches will be issued, but not major functionality overhauls. PR's gratefully received.

We recommend using LSCache with rewrite rules via these instructions if you are using Craft CMS v3.5 or later.

Before installing and activating the LSCache plugin, deactivate all other full-page cache plugins.

You can still use other types of cache (like object cache, or browser cache), but only one full-page cache should be used at a time.

Please see the Overview for the server-level requirements before attempting to use LSCache.

LSCache is controlled through rewrite rules added to the .htaccess file found in your Craft CMS document root. To start, the file may look something like this:

In order to use LSCache on your site, you must place the cache-related rewrite rules above the existing rules. The following example will cache all pages for 8 hours (28800 seconds) with the exception of any /admin URLs:

Feel free to modify these rules, if necessary for your site's needs.

See a video demonstration of this topic here. 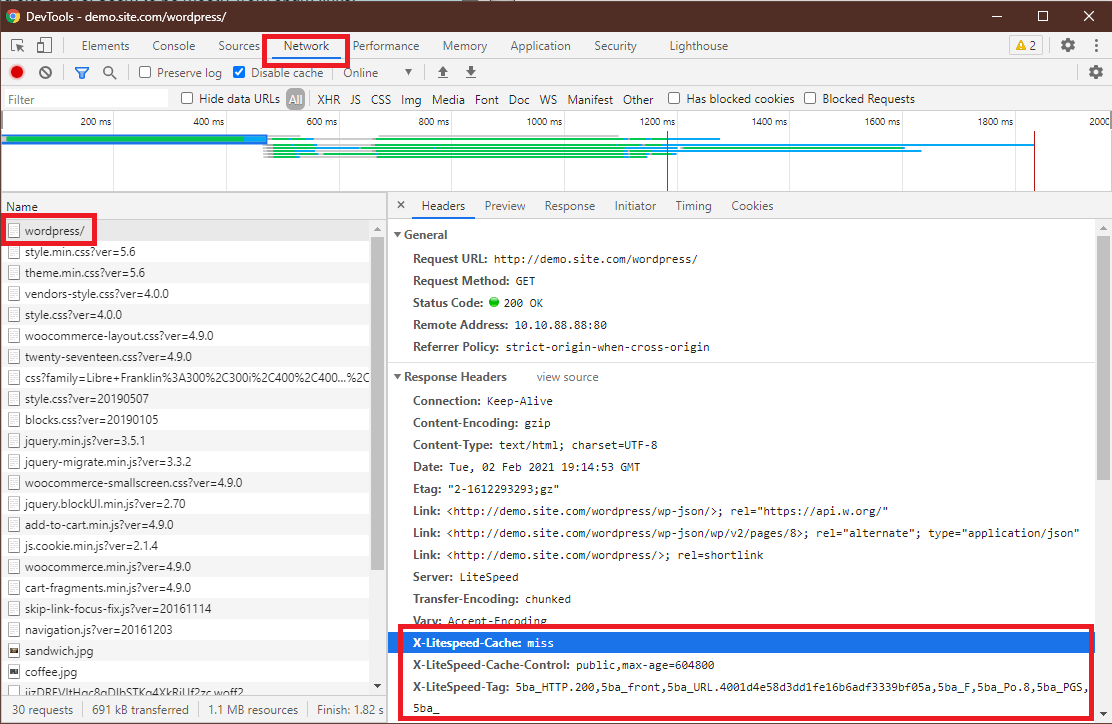 The X-LiteSpeed-Cache header is most common, but you may see X-LSADC-Cache if your site is served by LiteSpeed Web ADC. You may also see X-QC-Cache if your site was served via QUIC.cloud CDN. These alternate headers are also an indication that LSCache is working properly on your site.

Sometimes there are pages which should not be cached. To verify that such pages have indeed been excluded from caching, check the developer tools as described above.

You should see headings similar to these:

X-LiteSpeed-Cache-Control, when set to no-cache, indicates that LiteSpeed Server has served your page dynamically, and that it was intentionally not served from cache.

There's a simple way to see if a URL is cached by LiteSpeed: the LSCache Check Tool.

Enter the URL you wish to check, and the tool will respond with an easy-to-read Yes or No result, and a display of the URL's response headers, in case you want to examine the results more closely. 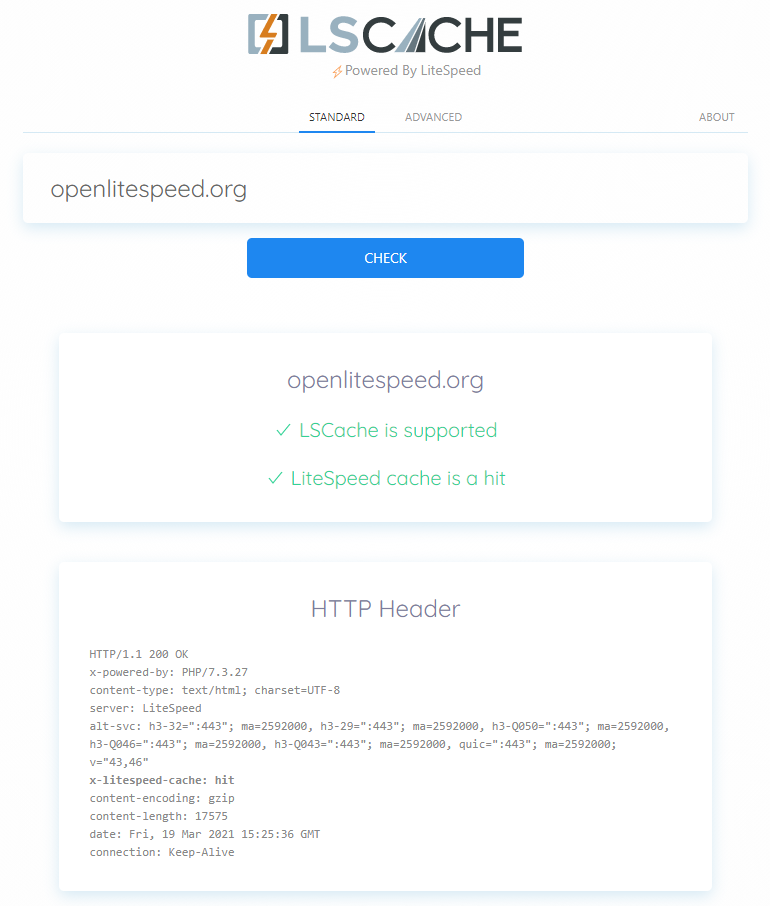 In addition to LSCache support, the tool can detect cache hits, and can detect when sites are using LiteSpeed Web ADC or QUIC.cloud CDN for caching.

Additionally, a Stale Cache Warning will alert you if browser cache is detected on dynamic pages. This is because browser cache may interfere with the delivery of fresh content.

When controlled purely with rewrite rules, LSCache lacks insight into Craft CMS's rules, and should only be used to cache content for a very short time.

The third party LSCache Purge plugin is the bridge between Craft CMS and the LiteSpeed Cache engine that allows you to cache your Craft CMS content for a longer period of time. The purge plugin understand Craft CMS rules, and as such can instruct the cache engine to purge content when it changes. This greatly reduces the risk of serving stale content to visitors.

You can confidently set max-age to several hours, if you know that pages will be automatically cleared from cache when they are changed in the CMS.

Our thanks to Scaramanga Agency for their work developing this plugin!

Craft CMS version 3.0.0 or later is required for this plugin. (You can use rewrite rules alone for earlier versions.)

To install the plugin, search for LiteSpeed Cache on the Craft CMS Plugin store, or install it manually as follows:

There are two ways to purge the cache. You can configure it to purge automatically when pages are saved in the CMS, or you can press a button to purge the entire cache at once. Please see the LSCache Purge Plugin's Github page for usage instructions and examples.